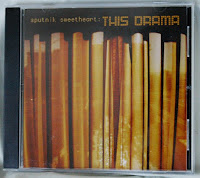 I was extremely lucky to be given the task of designing the new EP album art for Sputnik Sweetheart, with pretty much full creative freedom.

First, under the band’s art direction, I took one of my shots from Vegas, and created the front of the album – the image was of the curtain in the hotel room at the Bellagio, with the pool dimly sparkling behind it. The curtain made a lot of sense because of the band’s album, called “This Drama.” (It refers to a snippet of song lyrics that go, “This drama is just like a cop show.”)

Next, on the inside, I used the same curtain shot for the front of the actual disk. For the inside insert, I used a shot from the same Vegas series – this time a shot of the pool without the curtain in front of it. For visual continuity, I adjusted the color so that it was similar to that of the curtain shot. 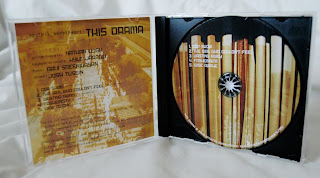 For the back cover, I wanted to make a further play on the line, “This drama is just like a cop show.” So I took the image of the curtain and burnt it onto a DVD. Then we took the DVD to our friends Caleb & Laura’s very hip apartment, and played 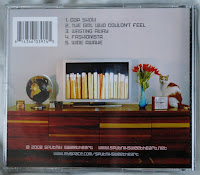 it on their flatscreen, and I photographed the shot on the screen in the living room with some fun props, including a globe, a can of Spam, and Caleb & Laura’s cat, Fattie.

Finally, I used a font the band selected to add all of the album details to the layout. I had to give myself a refresher in Illustrator, but it was a lot of fun, and I am proud to say that I have officially conceptualized and designed a CD! (In addition to shooting the photos.)