I recently found out that my friend Paul Nicholls, founder of Team Continuum, which supports the immediate needs of cancer patients primarily through New York City marathon sponsorship, had passed away last month. He was 61, although Paul would tell you he was 15, given that he was born on February 29th, and had only had that many birthdays. In reflecting on his life, I could feel the presence of his energy, still, and I knew that I had lost nothing. I will always have the beautiful way that he inspired me – the change he instilled in me was permanent. It became abundantly clear to me that death is simply a transition of energy states, and that the energy he brought during his life is absolutely still alive and present.

Below is the entry I wrote in his online memorial guestbook:

Paul first hired me as a photographer to shoot a Team Continuum event in New York before Christmas in 2005. From the very first production meeting, he struck me with his powerful forward momentum and energy. I had just founded my photography business, and Paul’s support of my work meant much more to me than a paycheck. It meant that the “real me,” that I was trying to put forth in my work, was coming across – someone was noticing – someone very special and full of powerful energy himself.

A couple months later, after shooting a few events for the organization, Paul and I were chatting, and he said, “I have to go to London in March. Do you want to come?” Because of the somewhat random nature of the invitation, he made it clear that it was an entirely friendly invitation (always the gentleman), and having never been to London (although a dear friend of mine was living there at the time), I accepted.

What a strange and exciting experience to have a client ask me to fly abroad with him, just for fun! At this early stage in my career, I was absolutely floored that work could lead to such magical experiences as getting to see London for the first time, and getting to spend time with my friend, Clara. I began to suspect that his likenings to Santa Claus were not unfounded, by the way I had lit up about the possibility of going to London (was he joking when he first asked? I’ll never know!), and then he making it happen.

Paul was there networking for the London Marathon, so I didn’t spend the whole time with him. But he insisted on taking Clara and I to dinner, and I also attended a marathon luncheon with Paul the afternoon of the event. At the luncheon, Paul said to me, “You should run in the New York Marathon this year.” And I said, “I can’t, I have asthma.” Paul said, “So? I have cancer!” (Paul had run in 2003, just 6 weeks after a bone marrow transplant.)

I knew right then that I was witnessing a truly unstoppable person, and that I had met exactly the right example for me and my then seedling-sized photography business.

You see, it was not just “becoming a photographer” or “starting a business” that I had undertaken, although my endeavor was both of those things. What I was doing was trying to follow my truest heart’s desires, and make my life as authentically my own as I possibly could. Paul was the best example of that I have ever met.

I took his generosity in our trip to London as a challenge, in that I wanted all my heart-felt whims and expansive ideas to take flight just as easily as we did on American Airlines that day. My work took on a new level of accountability.

2006, my first full year in business, was a huge success. I wrote Paul a heartfelt letter of thanks for the way he demonstrated what thinking big really means – following his example of making things happen in business, I was able to make my business thrive. I presented him with a framed print of London at night that I had taken on our trip, and a check for $1,500.00 made out to Team Continuum. I had never been in a position to make a donation of that kind before in my life, and it felt extraordinary. I knew that, inspired by Paul Nicholls, I would live this life of mine as big as I could.

With heartfelt love to his family, his wife (who I met), and his ex-wife, children and grand-children (who I never met, although Paul threatened to fly me back to England to photograph the grandkids once), I wanted to share this story, in the hopes that telling “Paul” stories will have us all living out our lives in the biggest ways we can, given both our advantages and our shortcomings. Paul saw the gift of his condition, and that, in and of itself, is one of the greatest human accomplishments. 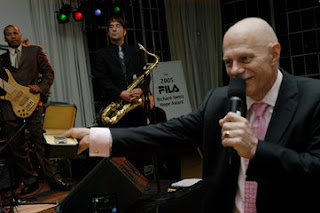 Photos, top to bottom: London street shot, London from the Oxo Tower (the same photo I presented to Paul in print form), Kids laughing at a magician at the Team Continuum Party in 2005, Paul Nicholls presenting a gift (also in 2005).

If you would like to learn more about Team Continuum, run in the marathon, or make a donation, please visit: http://www.teamcontinuum.net/