For the uninitiated, it may seem strange that Fashion Week, Fall 2010, occurred in February. Like many traditions, fashion has its own innumerable quirks. My friend Rachel works in fashion, for an agency in their hair and make-up department, and she has recounted many fantastic tales, such as the time she shoved boxes and boxes of eyelashes into a friend’s stuffed suitcase as she left for Paris, the only conceivable way to get them overseas to her artist even sooner than FedEx could have, in order for them to arrive in advance of the fashion show for which they were required (needless to say, Rachel’s hair and make-up artists think she is a miracle-worker). 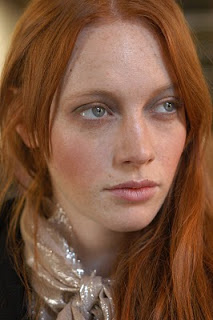 I have been a photographer for years, and have worked on lots of film, television, and commercial sets. I thought I knew a thing or two about make-up, beauty, and even styling. But when I first arrived backstage at fashion week, I realized that Rachel’s stories were the tip of an abominable, art-centric, impeccable iceberg. There were people everywhere – crammed into every inch of available space. Tables stretched along all four walls of every room, covered in carefully laid-out hair and make-up application tools and products. Cameras of every size and shape clicked away, while their operators bumped into each other, almost politely. In fact, the protocol I noticed immediately, was an acceptance of the chaos, and an incredible sense of respecting the need to share the space – what very little of it there was. The other thing I noticed immediately was the amazing professionalism, the way everyone knew how to do their job and try to stay out of other people’s way – how everyone had a specific detail to which to attend, whether it be clothes, modeling, hair, or make-up, and they focused intensely on doing their job well, despite the chaotic environment. 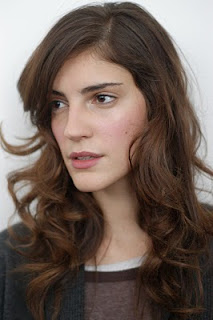 Sephora hired me to cover 27 fashion shows, behind-the-scenes, over the course of 8 days. It became kind of like a dance, jetting from place to place around town, reporting to the beauty writer Sephora had assigned to the show, and figuring out which model had a nearly-complete look ready to be photographed for the blog. The goal was to create images that would show off the make-up in a way to do it justice, as it’s Sephora’s Beauty and the Blog‘s job to show their customers how the make-up really looks on someone, and how to use it. Mostly that involved using existing light to create a beauty look — often having the model sit right in front of the same light used to apply her make-up — so I found it an extra special treat when the show was taking place in a studio with great window light. 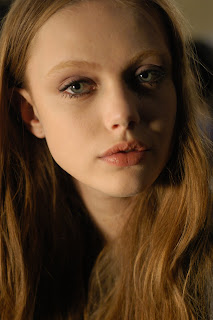 I had many, many little adventures during the week – a lot of which were commemorated for your viewing pleasure on my facebook page. I felt honored to document the hard work of so many talented artists whose skills delineated the quality of the brand they’re representing. The week yielded lots of successful shots, as showcased by the photos linked here to their original posts on the Sephora blog. One personal, hilarious moment was showing up to a show on Ash Wednesday with ashes on my forehead; a story Sephora liked so much, they let me blog about it for them! I’m officially a fashion week convert – bitten by the fashion bug and loving it. 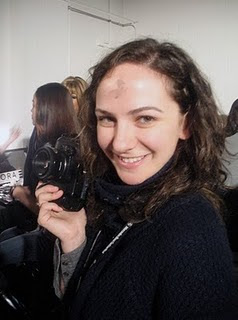 (Photo of me by Nicole Grippo.)