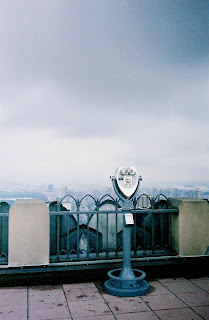 Recently, tucked safely within my Voigtlander, I came upon a roll of undeveloped film from an excursion I took with my parents to the top of Rockefeller Center back in September. I have been to the Top of Rock on a couple of occasions, and it never ceases to thrill me – it certainly provides the best view of the Empire State building from within the city – and something about the giant towering antennae hovering overhead and projecting television signals up to satellites that broadcast to millions, always makes me feel like I’m really at the heart of something.

I wanted to share a few of the shots I took this time around – trying to see the Top of the Rock from a slightly different perspective. There is something uniquely fun about developing a forgotten roll of film, and suddenly recalling what one was thinking about and experiencing at the time that one shot it. 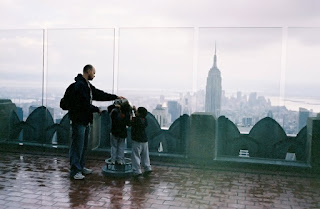 I recommend this spot to all of my out of town guests. And, it’s no joke – you really must try one of those binocular devices – you can see so many cool things all over the city for just 75 cents! (That’s so cheap, they don’t even put cent symbols on keyboards any more!) 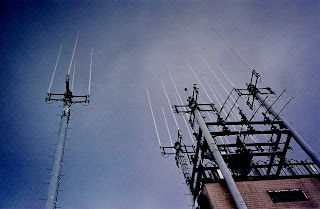 Of course, you will have to pay to get up there first. But the rollar-coaster-like elevator ride is entirely worth it, in and of itself.

View a shot from my last trip to the Top of the Rock by following this link to my blog entry from last December.