Shooting in the aquarium gave me a lot of freedom in a funny way. I only had my Voigtlander Bessa-R rangefinder camera, and 160 speed color film. It was quite dark in the aquarium, so most of the time my shutter speed was around 1/8 of a second. Since I didn’t have a tripod, and the fish swam quickly, I knew that it was an exercise in “feeling out the instant.”

In other words, without the ability to be precise about anything technical, I was free to feel, and sense the colors, contrasts, swirls, motions, and textures instead. And while this led to blurriness in some cases, I noticed even that added to a feeling of otherworldly-ness.

I had emotional reactions to the visual experience of certain kinds of fish – almost as if responding to the expressions on their faces. For instance, the eel seemed suspicious and frightening. In the turquoise-toned image

of the fish, he seemed to me like a ghost. The colors had an emotional impact, too. The very bright, multi-colored frame felt very happy, and reminded me of watching Finding Nemo. (There was even a fish that looked like Dori!)

The stingray seemed wonderfully elegant, and much more like a bird than a sea creature. But with the grid of the giant tank as a backdrop, that elegance became ironic, and maybe even a little sad. Whether or not it is possible that any of this emotional content was registering as I depressed the shutter I’m not sure – as I mentioned, the fish moved very fast – but in looking at the moments I managed to capture, it seems arguable that it was.

I took a class with photo editor/teacher Seth Greenwald, who would insist that our human

instinct always deserved credit – that we are able to sense something in the moment we are observing, and as a photographer one learns to let that moment express itself on film by hitting the shutter at exactly the moment we sense it.

Seth would ask of a shot, “How did you do this?” And the shooter would reply, “I don’t know, I was standing there, and this just happened.” And Seth would said, “No! It didn’t ‘just happen.’ You were present. You were observing something.”

He emphasized that it wasn’t the tool, format, or even the skills we used that made an image work. It was something else, a sixth sense about a moment, an ability to tune in to something, an ability to press the shutter at that precise moment. 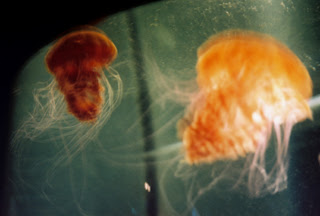 Of course, I have learned a great deal about tools to make the exposure and tonal quality of an image meet professional standards, and completely honor the value in that. But I have always felt strongly that the mastery of tools and skills should always be in service of something. There

should always be a strong idea, emotion,concept, or even simply information to convey. And there should be a lot of integrity about what needs to be conveyed being held by the person trying to convey it – the photographer.

At the aquarium, with one simple tool, with practically no options, I was able to really tune in to the integrity of the subject. It wasn’t possible for me to be distracted by trying different lenses or exposures. I had only 2 rolls of film. There was no art director, there was nothing to sell. Just this sea life, living.

We say that sea life “swims,” I suppose. But there was so much subtle movement, with any of these creatures, involved in its propelling forward or just moving around. It was easy to get drawn in to their undulations, and sense their life-force. And sensing and honoring their existence made wonder if what we label “swim,” is nuanced enough to describe their lovely aquatic lives.

In closing, here are the jellyfish shots I’ve chosen to blow up for my wall: 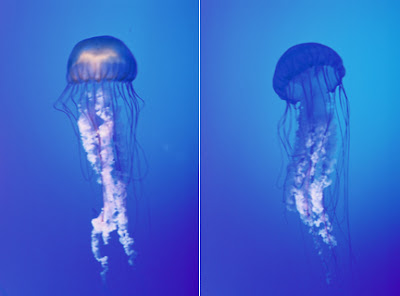