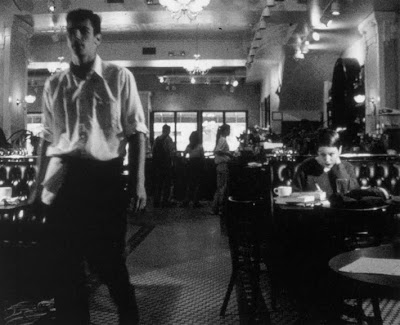 Several years ago, my friend and I were strolling down Broadway, having that conversation while I noticed a large patch of NYC sidewalk that had somehow been infused with sparkles, and made the ground glisten while we walked. He later wrote a beautiful song lyric, “You turn these leaden streets to gold,” which always reminded me of that walk.

I studied French for 6 years, lived with a French roommate for 5 years, and dated a 1/2-French man for the better part of 2004. For the brief moment of my life when I was an architecture major in college, I studied the flying buttresses of Notre Dame, and for most of my young adult life have been bombarded by images of Paris – literal and figurative – through my studies and the company I kept. Let’s not even start on my fascination with Henri Cartier-Bresson.

When I was in college, I directed a short on 16mm film, called “Au Café,” (b&w; still featured above) based on a piece I had written in a café in Ann Arbor, daydreaming about what it would be like once I had moved to New York, and been to Paris, and the strange fleetingness of an emotion’s importance as its significance is changed over time. I wrote, “Soon I’ll be in New York, then Paris, and all these words will just be words one day.”

My father is obsessed with French culture – an obsession that spilled over from his interest in wine. He has constructed details all throughout my parents’ home to emulate the architectural nuances. This past summer, I was home visiting, and my father said to me, “Did you know that Grandma has always wanted to go to Paris? First Grandma, then me, now you. Sarah, you HAVE to go.”

That same week, I accepted an opportunity to fly to London to produce and direct a short film for my friend Clara, and decided that the 3-hour train ride was just too easy to pass up, and finally – after a veritable lifetime – I was going to Paris.

Immediately upon my arrival, Paris set out to prove itself just as magical as I had ever hoped. I walked out of my hotel and crossed the street to the Jardin des Tuilleries. A man pedaled up on a bike, and started asking me something in French. Six years of study instantly failed me, and
I apologized in English for having no idea what he was saying. “Ah! You’re not French?” He said in a thick accent. “Where are you from?” I told him I was in from New York, and he gave me a look up and down and declared, “You are too stylish to be American!” 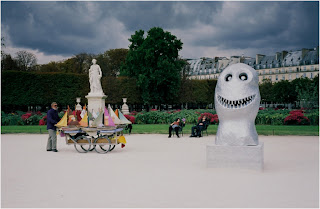 I walked approximately one city block through the park and found myself looking at the Louvre, framed by a pastel sky of soft light, blue and soft pink fluffs of cloud, and forgive the obvious metaphor, but it truly looked like a painting! I turned towards the river, and walked just one more block and down some stairs, et voila – I was walking along the Seine in the late afternoon sunlight. Right then, I knew this place was ethereal. It had crept into my dreams, and my thoughts, and my work, and my life, and when I got there it was not as if the dream had come to reality – it was as if I had finally fully stepped into the dream. 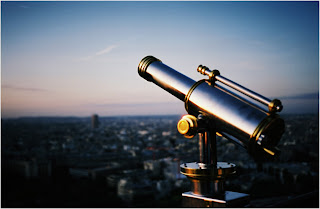 And, it was a miraculous dream, full of twists and nonsensical delights. Once, I walked right up to a cart in the middle of the street, and selected from a huge array of candies – soft and chewy ones, chocolately crumbly ones – filling a little white-and-pink-striped paper bag. I got a pizza from a hole-in-the-wall shop, and they put crême fraiche on it. Whenever I bought something, the shopkeeper would put extra little presents in my bag. And, every time I left a place, they said, “Au revoir,” as if I were a long-lost friend, and they had been truly thrilled that I had stopped by. 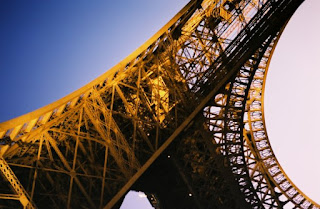 In creative works from the French culture, like films and music, I have always sensed a certain ironic other-worldliness. Like the French saw some hilarious joke about life not being real – about the possibility that we don’t have to take it all so literally – something they would imply, but if you weren’t in on the joke, they weren’t about to bother to explain. In Paris, I wondered if maybe none of it was real – if maybe I had finally fully understood the joke.