For years, I apprenticed with photographers who shot on film, and glanced awestruck at the forever classic imagery in vintage copies of Life magazine, or of French street photographers like Henri Cartier-Bresson. By the time I finished college, one of my mentors was shooting half on film, half on digital. Five years later, the entire photo industry had “gone digital.” 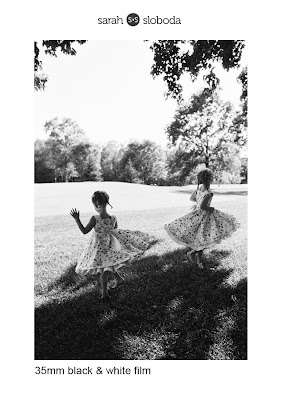 There are lots of reasons for this rapid change, many of which are echoed in stories of any and all other types of technology from iPhones to facebook. And, digital photography, like digital anything, does present certain advantages – so many that I needn’t recount them here, but suffice it to say, that I bet you can hardly think of anyone under the age of 45 who doesn’t have a digital camera of some kind.

What many people don’t know, is that shooting on film has some wonderful advantages, as well, and not as significant drawbacks as one might suppose. I’m going to offer you a compare and contrast, so you can begin to decide for yourself if you have a preference one way or another. First, let’s dispel a couple of myths. 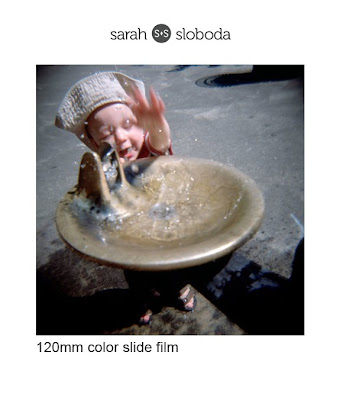 MYTH 1: If you get your portraits shot on film, you won’t be able to access them as easily.
TRUTH: Whenever I do a shoot on film, the images are scanned at the time of processing, and my clients get the photos on disk – there is no difference in the delivery technique whether I shoot film or digital!

MYTH 2: Digital technological is way better than film technology.
TRUTH: While digital creates images instantly, it still takes time to manipulate the images to their best potential. While digital has a higher resolution, this “benefit” is only really maximized for the likes of perfectly polished automobiles at billboard size. (I mean, do you really want to be able to see every pore on your face? For me, the fewer pores you can see, the better!) And, while digitizing images at some point of the game is pretty much essential because of the way most people store their images (on the computer), there is absolutely no reason why photos need to be captured digitally.

MYTH 3: More is better.
TRUTH: Many people will say, “You can shoot so many more photos on digital!” I would argue, that not only is that not better, it can actually be to the detriment of the uniqueness of the moments captured. For example, when a spontaneous expression happens, shooting on a seemingly never-ending digital memory card causes one to get a little trigger happy. Snap, snap, snapping away, desperate to grab something, not altogether conscious of what. On the contrary, when one is limited to a very small number of frames (depending on the length of the roll of film), one has to be tuned in, alert, and enraptured in the moment so as to hit the shutter at THE exact right moment. There is simply more artistry in the capture when shooting on film.

I learned to shoot on film, and have done my best to transfer the integrity of staying tuned in to a special moment to when I shoot on digital, but I am by no means perfect at this, and am still subject to the trigger-happy tendency digital encourages. I like to use slow-shutter speeds and other tricks to “soften” my digital images to emulate the ethereal look of film. Still, I think there are obvious visual differences to images that were recorded on film versus those on digital.

Nowadays, people are accustomed to seeing digital images, and the soft, artfulness of film may not be preferable, or even noticeable to the layperson. And, some people truly do prefer the incredible sharpness and vibrance digital photography provides.

Here are a few examples of similarly shot photos – one each on film and digital – so you can compare, and perhaps develop a preference. Please note: this is truly the connoisseur level of photography appreciation, and it may take a lot of attention and practice to truly appreciate the subtle nuances of the craft.

Black and White – See the way black and white film allows for much more subtlety in the gradations, particularly in highlights and shadows. Digital makes very contrasty black and white’s.

Portraits – Note the extra warmth and softness on film; the impeccable sharpness and color balance on digital. 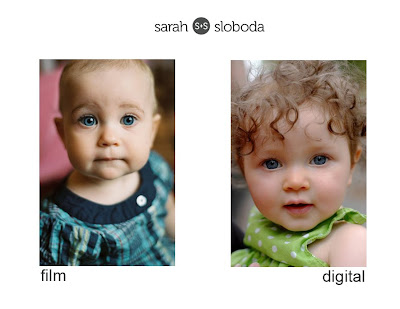 Bright Sunlight – Notice how film captures details both in the highlights and in the shadows; digital features vibrant color. 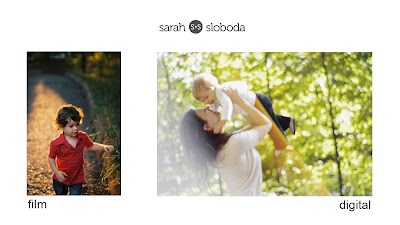 Personally, the steadiness of mind called for to show up to the moment when shooting on film, along with its timeless beauty and slightly mysterious feeling, cause me to lean towards film artistically. That said, if the photos are needed in a hurry, or if there is a strong reason to need to be able to produce a lot of them at once, digital is the way t
o go.

If you’re curious about trying a shoot on a medium you haven’t tried before, please email me at rsvp at sarahsloboda.com, to arrange a shoot.

To view a personal project shot on 3 types of film, please click here to view my recent trip to Stone Barns, on facebook.