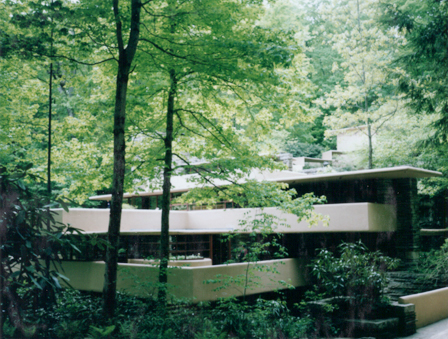 This spring, I went to see Frank Lloyd Wright’s work in southwestern Pennsylvania.

Since, despite my affection for the form, I am not an architectural photographer, I carefully considered how to capture the visit so that it would have lasting meaning for me artistically, and serve as a special memento from my trip, as well. I decided to shoot almost exclusively with a thrift-store-acquired 101 Polaroid Land Camera, which meant I would get cool little prints with white borders instantaneously, and also that I would have very few frames at my disposal.

With a slow, deliberate approach, I captured the surrounding spring lushness of the Pennsylvania hills, and several exteriors at Frank Lloyd Wright’s 1930s masterpiece, Fallingwater. (I visited Kentuck Knob, too.) Nearly everyone on my tour wanted to know what kind of a crazy machine I was shooting with. One guy, another pro photographer heavily laden with all of the latest digital bodies and lenses, admitted jealousy over the simplicity of my approach. I was flattered.

I recommend experiencing Wright’s work — and the surrounding landscape that inspired it — in person, but I just had to share these instant prints (scanned for your viewing pleasure).

In addition to the Land Camera, I had a plastic Holga loaded with black and white Tri-X film in my handbag. Here are some shots I snapped with that one.