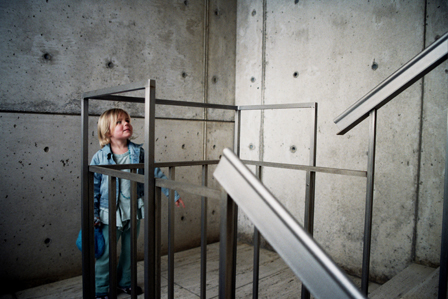 For this installment of Kids in Space, I asked my architect friend and colleague Julie Gabrielli to comment on the photos.  I was so intrigued by what she wrote, I decided to include it in its entirety here.

Julie is an architect and an inspiration for those who want to go beyond the “green movement,” into a more evolved, holistic approach to living on our Earth.  She is currently running an indiegogo campaign to produce, “I Want America to Thrive,” her documentary short film project to renew the American dream.

Here’s what she wrote about my excursion with the inquisitive young Celeste to the Salk Institute, in San Diego:

I love how lonesome this space is. The classic photographs of it are empty. It’s not that the space is hostile; it simply doesn’t need humans. Its power derives from what is contained: light, water, ground, sky, wind and the sound of surf in the distance.

Even though the space is dauntingly stark, the child knows it is as much a part of the natural world as the hilly shoreline beyond. The planes of travertine, though quarried and placed there by men, are as elemental as the clouds.

Seeing these made me think of how every kid in my generation knew who Salk was — that he “invented the polio vaccine.” I never even knew what polio was, but I could feel the dread of it in the adults around me. It’s particularly touching to see a child cavorting around that sober place, knowing that she will never be touched by polio. 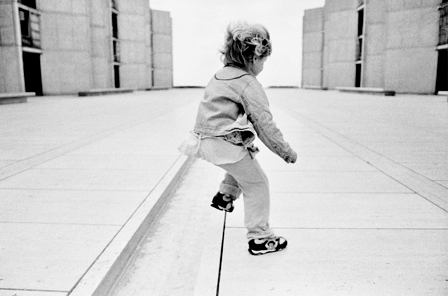 Her spontaneous motion is framed by stillness. She is attracted to the water, the one living element in the hard, geometric shell of space. Writers on the poetics of this place tell the story of the sky pouring down into the rivulet, or the rivulet flowing west to join the Pacific Ocean. Since her body contains the same water, she knows this without words.

The black and white photographs capture the space best, except for the ones near the opening. She makes a perfect down-dog over the rivulet, a symphony of blues and aquas in the cream and grey landscape. That’s what we do, isn’t it? We see a gap, a chasm, and we want to bridge it. As adults, we often tell ourselves that the chasm cannot be bridged. To a child, there is always a way. Here, she mends the separation between right and left with her own body, unconsciously demonstrating that completion and wholeness is never further away than our own hands and feet.

The edge of the marble-clad space is high above the ocean, windy, exposed. We have simply earth, sky, sound. The horizontal slabs pin the tremendous thrust of the ground plane in place, countering the rush of lines towards the horizon, allowing only the water to sail over the edge. The child must sense the power in these precarious horizontals, as she is drawn to stand and walk on them.  —Julie Gabrielli 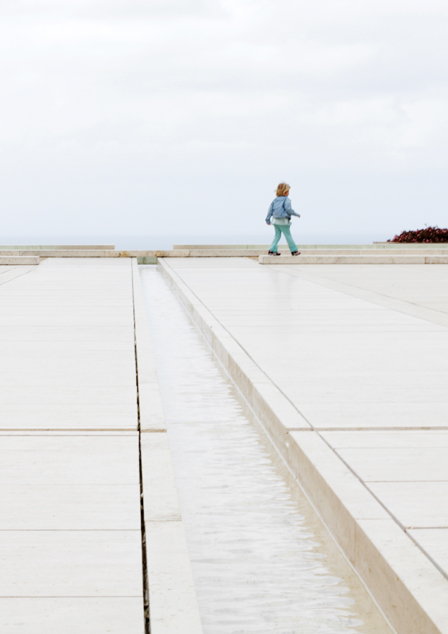 KIDS IN SPACE: Documenting the Child’s Perspective of Architectural Design
Previous Post
Main Blog
Next Post
Love this? Connect on social so you won't miss a post.