Shooting crisp, vibrant digital photos for clients day in and day out sometimes makes me crave a more raw, dark, vibe-y feel. I like watching indie films and listening to indie music, finding inspiration in the sense of being on the edge of something, admiring the unpolished and the perfectly flawed.

Whenever I travel, I take some plastic cameras along with experimental films like the Lomo Redscale film stock I used in my Holga in this series of photos in Europe over the course of the past several months. These images are a pretty stark contrast to the bright family portraits I’ve been taking in California lately. Their moodiness reflects some of that indie feel I admire in other mediums.

The 2014 Lambeth Country Show in London took place on a hot, sunny July weekend, but the redscale film disguised the day’s vibrance, getting all funky and overexposed, and adding a strange cast.

The Holga and I took a walk in the Normandy countryside through the minuscule town of Etreville on Christmas Day 2014. The sun shined through but it was quite cold, and the film reacted differently in the cooler temperature than it had in the heat.

On January 1, 2015, I walked through Berlin as the sun went down. It was even colder here, and the light was waning. The film caught some interesting glimpses where the sun weakly struck through, and the rays were quite faint by the time I got the last shot of the train on the bridge. 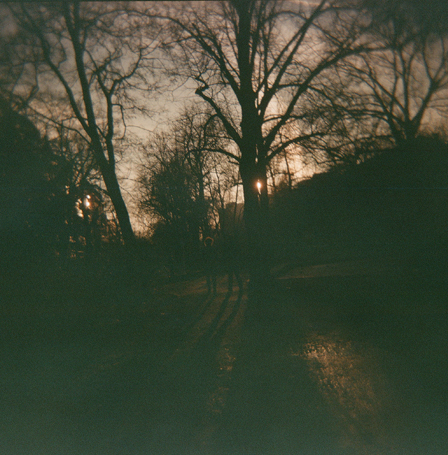 I wonder what it would look like to allow this indie-influenced style to affect my portraiture work more often. While the images have an unrealistic color palette and feel, there is something quite genuine in things that appear flawed or imperfect. It is real life, which doesn’t slow down or wait for all things to be perfect. I want to capture my subjects in the best light, but I also want it to be known that there is beauty in what’s real, and there is realism in strangeness, randomness, spontaneity, and imperfection.