I went meandering through the sweet neighborhood of Manayunk, in Philadelphia. The trees were budding, the sky was blue, algae was amassing in the canal… It was a brisk and beautiful day! Manayunk is a cool little area with lots of adorable shops and cafes – it reminded me, oddly, of Seattle combined Ann Arbor – or perhaps just of a time in my life when I lived in Ann Arbor and visited Seattle. In my journal, I wrote

“Something funny about these little town-like neighborhoods in the U.S. – like they’re trying to be something, and they’re partially succeeding, but one isn’t sure exactly how or what they’re doing right or wrong. It’s kind of cheesy, yet sweet, and makes you think of moms having lunch dates and older women buying colorful jewelry and college students buying incense and ironic posters.” The vibe is that of a sort of a safe-feeling liberalism, where art is appreciated and they very strictly enforce the parking meters.

In any case, I had a lovely day there. I bought the paper for the sun prints (below), and a cute pair of new shoes; I strolled along behind the shops where the Manayunk canal flows next to an old train line. The sun was shining and everything was bursting with new life. Cheesy? Perhaps. Adorable? Pretty likely.

FOUND ART (sort of)
When Kyle and I were in Buenos Aires last year, we found a little family-owned camera shop where they were selling old glass plates. In the photography timeline, glass plates were what preceded plastic film as the fixture onto which an image was formed within the chemicals – this is how a photo was recorded in the old days before digital was invented. (Nowadays I sometimes have little kids come up to me when I’m shooting film and try to see the back of the camera, saying, “Let me see!” and looking completely blank and awestruck when I tell them there is nothing to see – the image isn’t fully formed yet.)

In any event, I was delighted to find them selling these old glass plates – some of them were 3×4 and some were 5×7 inches large, and we got a couple of each. They weren’t expensive, and I would have bought the lot if we didn’t have to worry about how to fly back with them. I don’t really have any idea how old they are, although glass plates originated in the mid-1800s, and plastic film was being used for motion pictures by the 1880s, so it’s possible they are quite old, indeed! (Or that someone was using an old technique some time later – still cool.)

For over a year now, I’ve been wanting to take the plates to the darkroom to make black and white prints out of. The cool thing about such large negatives is that you can make a contact print with them, and what’s even cooler about the glass plates is that you can set them right onto the paper and the image makes contact with the surface of the paper – all of this gives you a very sharp image (the 19th-century equivalent to high-res).

Maybe it’s laziness, or maybe it’s too much time in front of the computer, but I haven’t rented a darkroom in quite awhile. It seems like a lot of work, even though the quality of a hand-printed photo is undeniably beautiful. As un-jaded as I strive to be, even I like the speed and ease of the digital age, what can I say. Wouldn’t you know, a fun – yet analog – solution came along! While I was in Philadelphia last weekend, I found a little science store called Spectrum Scientifics, in the adorable shopping district called Manayunk. The science store sold paper for sun prints! This paper allows you to create, essentially, a very simplified version of a cyanotype (see sidebar for definition by Alexander Zolli), with the paper pre-coated with a blueish light-sensitive chemical. All you do is place something on it in the sun, and the paper inverts negative into positive. So Kyle and I could make contact prints at home in 3-and-a-half minutes! (All you do then is wash the prints under running water – highly recommend this for young, budding photographers who want to know what it’s like to see an image take form on the chemically-enhanced paper. There’s NO clean up!) 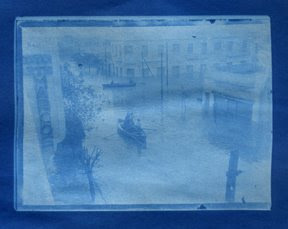 Although forgoing some of the sharpness and nuances available by properly fashioning a print in the darkroom, it was cool to finally see the glass plates in positive form. There is a portrait of a man, a portrait of a girl who appears to be blind, the front of a theater in the rain, and amazing shot of a flooded city – with a boat floating down the road! Of course, you could kind of tell all of this from the negative images on the glass plates. But it was a lot of fun to see the positives take form on the paper.

In a more formal classroom setting, I would be required to put my work up on the walls from time to time for all of my colleagues to review and critique. 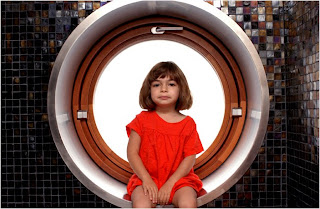 In the spirit of that, I would like to invite anyone reading this to have a look at my latest web update. It features all kinds of new shots from child model test shoots this spring.

I will be excited to get some feedback – is the work speaking to you? Does it seem to achieve what it sets out to achieve?

You may email me directly, or post your comments here – whichever you prefer.