Recently, I went to the MoMA with my friend Arthur (a brilliant attorney from Cleveland), and had the chance to check out the films and paintings of Salvador Dali on exhibition there. Dali is an intriguing artist because of his commitment to the dream state – his work is uncensored in sexuality, in a certain grotesque-ness, and, frankly, by the norms of waking-state logic.

END_OF_DOCUMENT_TOKEN_TO_BE_REPLACED

One more trip to the beach… 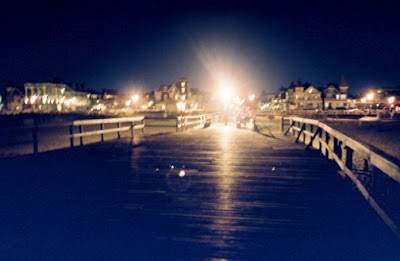 END_OF_DOCUMENT_TOKEN_TO_BE_REPLACED

This summer, I rented a car several times for various excursions, for business and pleasure. I visited the Berkshires twice, went all the way to northern Ohio, and drove across Long Island to Shelter Island. Each time I drove somewhere, I would

inevitably come upon a garden center or farm selling flowering plants, and I would stop and select a new plant friend to take home.

In the Berkshires, there was this huge, amazing garden center and greenhouse. I got two different little flowery plants there – each with different size buds in different shades of purple. In Ohio, I stopped at a local garden store close to my parents house and found a huge petunia plant, in yet another shade of purple. Driving back from Shelter Island, I found this amazing farm where they sold all kinds of organic produce, and there I bought a pot of sunflowers, ready to bloom.

END_OF_DOCUMENT_TOKEN_TO_BE_REPLACED

In getting into the spirit of a new season of ceramics classes, I decided to experiment with some Italian air-dry red clay. I started playing around with a chunk of it (it’s more rubbery than the white ceramic clay we use at the Choplet ceramics studio), and the next thing I knew I was working on this little hollowed out tree stump.

I like the idea of a hollow tree stump, its carcass an open shell to contain new life or just air, or in my case, perhaps become a pencil holder. In other words, the little form that took shape in my hands made me think of real tree stumps, having passed through a life so full and rich

that it grew wide and strong… and then passed into the phase we call “death,” rotted away on the inside, and eventually dried out. The whole process providing life cycles to countless organisms, I find it fascinating to think of the decades involved in the process of the creation of a real hollowed out tree stump, which in turn, provides the perfect little hiding place for a raccoon to peek out from, or for a child to come upon, and imagine fairies and nymphs throwing soirees.

My little tree stump took several days to dry out on my windowsill. It was fun getting a practice run at ceramics again before starting a new class – this fall, I’m learning to throw on the potter’s wheel!

One of my favorite things to do is take a walk over the Williamsburg Bridge. It is the Northern-most bridge of the three bridges connecting Manhattan and Brooklyn, with funky industrial-era architecture (it was completed around 1896). The bridge connects my current neighborhood of Williamsburg with my previous neighborhood – the Lower East Side. Combining the time at the two residences, I’ve been making bridge treks for about six years now!

I find the 20-minute walk to be very meditative, and have taken a lot of inspired photographs on the bridge in all this time. There are cool views of the mid-town and downtown Manhattan skylines, DUMBO, and Williamsburg. Plus, you can watch the boats and barges coming and going along the river and out to sea.

The photos in this post are the most recent ones I shot on the Williamburg Bridge, using just a little, plastic, panoramic camera. (It’s a long walk, so I often get creative, instead of carrying heavy equipment. I’ve taken plenty of cool shoots on my cell phone!) Right now, there is a lot of construction going on in Williamsburg, and there is an amazing view of a huge crater at a construction site. That particular day, there was also a boat-plane soaring over the East River, getting ready to land. You could see it in the sky, looking tiny against the huge bridge girders.

Walking the bridge gives me a lot of perspective on city life because it allows me to be out in the fresh air and looking at the city from a distance. Of course, there is a lot of pedestrian and bicycle traffic on the bridge, so it isn’t exactly an escape, but it is simply a way of stepping back and seeing the city in its glory. You can really appreciate how vast and dense New York City is, how much human brilliance and strength went into building this place. It reminds you of the pioneering spirit that created it – one of the greatest cities in the world – and it reminds you that all the pushing on the subway, all the determination to work one’s way through a crowded sidewalk, maybe have their own reason after all, and don’t have to be regarded as a nuisance. They are, in fact, symptoms of the same pioneering spirit, of people who will not be stopped, people who came to the city to pursue their dream.

I decided to try out some old, grainy film (1600 speed Fuji color and TRI-X b&w;) in my Voigtlander Bessa-R camera while driving around the Berkshires this summer. The advantage to shooting high-speed film (the same as shooting a high ISO digitally) is that you can shooting at faster shutter speeds, and thus hand-hold shots in lower light – or, it gives you flexibility for using a higher f-stop (for greater depth of field). The cool thing about film is that the graininess that comes with these advantages is random – as opposed to digital where it looks noisy, film grain has a classic, artistic look.

Here are a few sights seen in the Berkshires:

1) A river that runs through Williams, MA. 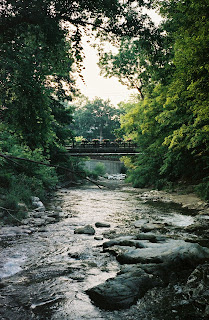 2) Reflection of a church in the window of a building at Williams College. 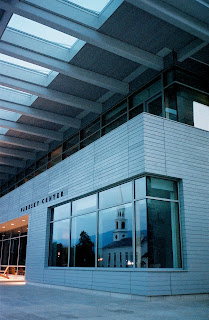 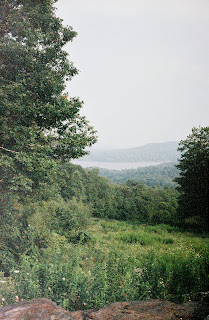 4) Looking down a hill at a little structure where they make maple syrup (the little building near the trees) at 325 Savoy Road in Cheshire, MA. 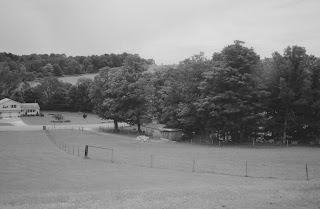 5) The farm at what was once Susan B. Anthony’s house. 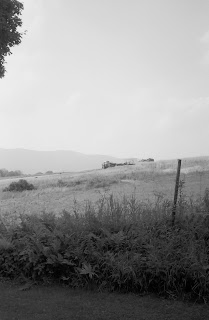 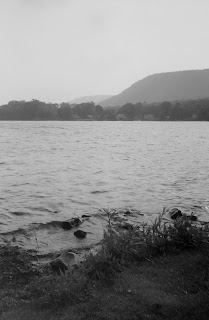 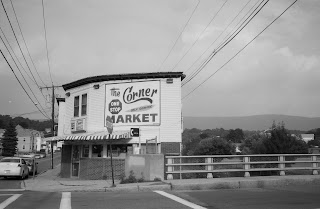 On a recent trip to Cleveland, I visited a steel plant, not too far from downtown. Well, I didn’t exactly visit, but rather parked my car illegally across the street to get some photos. I thought it was amazing to see these huge relics of the American Industrial Revolution, and I am fascinated by Cleveland. Actually, I have also started a tourist blog about all the fun and quirky things to do in Cleveland called, “Cleveland Hipster.” (Click on the link to check it out!)

(Artistic note: All of the black and white images were shot on a plastic, automatic panoramic camera that I found at a yard sale in the Berkshires for $1.00. Below is a design I mocked up for a new Cleveland Hipster logo. Soon, I will convert it into a t-shirt design, as well. In the meantime, you can see how it looks as the branding on Cleveland Hipster’s facebook page.) 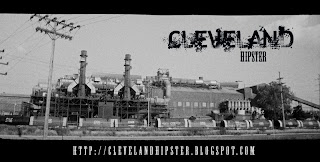 END_OF_DOCUMENT_TOKEN_TO_BE_REPLACED

While in the Berkshires, I took a field trip to MASS MoCA – the western Massachusetts Museum of Contemporary Art. The building is a huge old factory and warehouse with water flowing around deep in concrete troughs, like a moat. 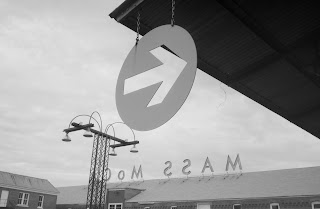 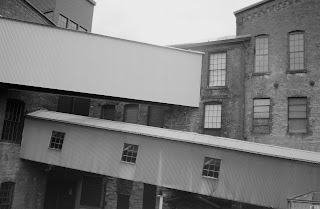 On exhibit right now, there is an installation by Jenny Holzer, which consists of a huge concrete beam-ceilinged room with several giant bean bags spread out all over the floor. From each end of the room, huge words are streaming from projectors, and the illuminated words pour over all of the dark room’s surfaces. We entered the installation from the industrial-sized freight elevator, which was a stunning way to walk into this kind of experiential art. Below are several shots I took of the installation, entitled, Projections (copyright Jenny Holzer):

The museum was very cool! I loved exploring the architecture as much as all of the exhibits. There is an inspiring energy in the mountainous Berkshires that makes it a perfectly suitable backdrop in which to experience the arts. It is home to the Williamstown Theater Festival, and lots of other summer theater as well. Out in the fresh summer air, it was easy to take in and process some heady fine art, and really relish the experience.

Last Look: Here is an upside-down tree pot, outside the museum. 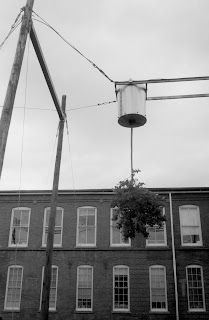